Purple Day is a grassroots effort dedicated to increasing awareness about epilepsy worldwide.

On 26 March, people from around the globe are asked to spread the word about epilepsy by wearing purple.

Purple Day was founded in 2008, by nine-year-old Cassidy Megan of Nova Scotia, Canada. Motivated by her own struggles with epilepsy, Cassidy started Purple Day in an effort to get people talking about the disorder and inform those with seizures that they are not alone. She named the day Purple Day after the internationally recognised colour for epilepsy, lavender.

Over 100,000 students worldwide have been wearing purple on 26 March! Hundreds of workplaces and organisations (including Epilepsy ACT) have also joined the campaign, wearing purple to work and hosting Purple Day events and promotions.

Epilepsy Australia is the official Australian partner of Purple Day, and Epilepsy ACT will join with other organisations around the globe promoting Epilepsy Awareness. Together we can end the stigma and discrimination of epilepsy during the month of March and on Purple Day, March 26.

Epilepsy ACT is the ACT member of Epilepsy Australia and is proud to have the official role of promoting Purple Day throughout the ACT.

Get involved and go purple!

2017 marked the first WALK for Epilepsy in the ACT and it was a great success. We hope to continue to grow the WALK every year and invite you to be part of it. The walk raises awareness during Purple Month for Epilepsy, generates positive connections for people living with epilepsy in the local area and provides a platform to raise much needed funds for the continuing work of Epilepsy ACT.  Come and join the first steps to bringing more awareness and much needed funds for people with epilepsy in the ACT.

Join us again for our 5th annual walk around Lake Burley Griffin, on Sunday 7th March 2021.  Registrations are now open!

How you can help

You can become involved and help us to increase awareness of epilepsy and raise much needed funds for Epilepsy ACT.  By doing so, your valued fundraising efforts will assist to provide vital services and programs for the 8,000+ children and adults living with epilepsy in our own community. 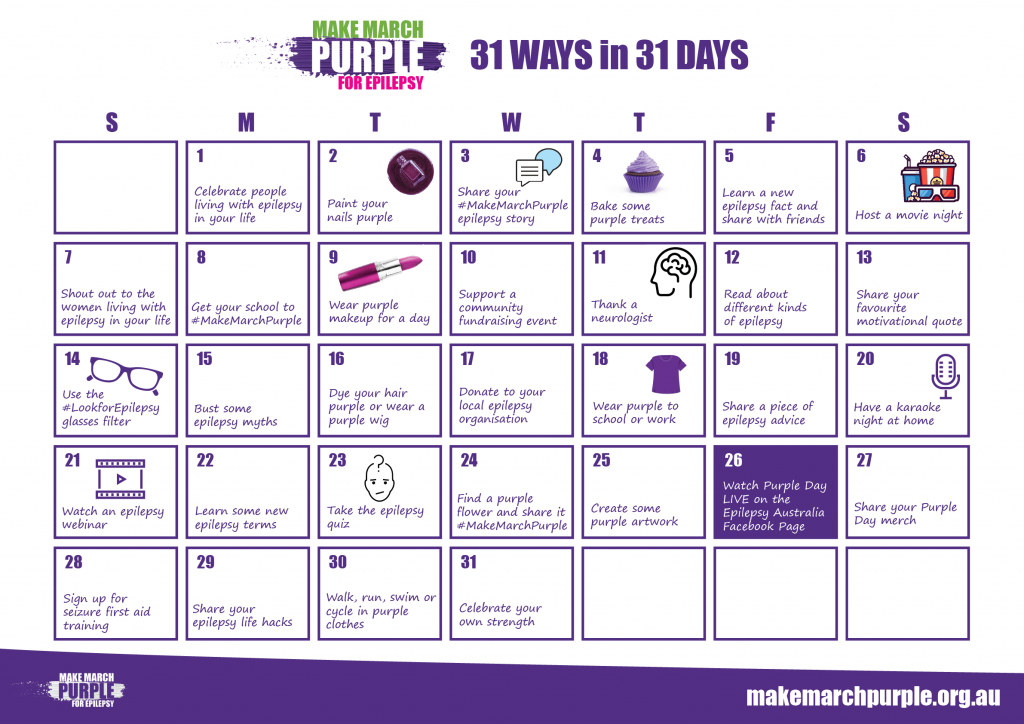 26 March is Purple Day. Why not wear purple and encourage others to do the same – from wearing an awareness ribbon, to dressing in purple or going all out and dying your hair purple!

Volunteer your Time during Purple Month

Every March we ask for volunteers to help sell merchandise and raise awareness during Epilepsy Awareness Month – March. Can you spare a few hours or a day to help in March 2021?

Click here to view our upcoming events and to book yourself a time to help.

Other ways to Volunteer are:

Support Group Facilitator –  Epilepsy ACT run self-help support groups for people with Epilepsy and their family and friends. We have an ongoing volunteer role for a group facilitator.

Peer Support – participate by sharing your personal experience with members in similar situations.

Join us on 7th March 2021 and Walk for Epilepsy

Come and join us when we join together to WALK for Epilepsy here in Canberra.  You can be part of the first steps to bringing more awareness for people with Epilepsy in the ACT.

The Walk will take place on Sunday 7th March 2021, Commonwealth Place, Parkes (starting on the grass area next to Questacon).  Registrations are open now.

Find out more about the Walk for Epilepsy and how to register here.

Merchandise is available to sell on our behalf anytime, please call our office to get your box today.

Add a Donate button to your Facebook page.  Choose ‘Raise Money’ on your page when creating a Facebook update, select Epilepsy Assoc. ACT as your chosen charity.  All funds come directly to Epilepsy ACT and go straight to work in your local community.

Create your own Online Fundraising Page

It has never been easier to raise money for Epilepsy ACT with an online fundraising page through GiveNow.

Raise more money by creating a personalised online fundraising page with your own photo or video and tell your story about how and why you are trying to raise money.

No hassles collecting promised money or issuing receipts because GiveNow processes every donation from your sponsors, issues the tax deductible receipt (if applicable) to the donor immediately by email, and pays the money directly into the Not for Profit organisation’s bank account.

Ask more people by email. Online fundraising lets you email people all over the world to show them what you are doing and why, and to ask for donations.

Get instant responses, everytime someone donates, you will be sent an email telling you so that you can say thank you (unless they wish to remain anonymous).

Have more fun, by sending personal emails to your friends, family and colleagues and let them leave their message of support.

Click here to set up your own GiveNow page for Epilepsy ACT.

Host your own fundraising Event.

Become the host with the most this March.  Host a BBQ, a girl’s night in, a games night or even a morning tea – why not make it a team challenge and arrange an office bake-off!

Encourage your local community, schools and businesses to get involved by holding a mask-themed event or free purple dress day in return for a gold coin donation.

Your employer or your business can help fundraise, volunteer, provide pro-bono support or gifts in kind for Purple Month. This plays an important role in helping us to fundraise and run  Epilepsy Awareness campaigns while keeping costs low. Fundraising or Volunteering can be a brilliant team building activity and also lets Australia and the world know that your company is making a real difference to the local community.

Host an Event to Raise Funds or Awareness

Selling Purple Day Merchandise is a great way to get involved in Making March Purple and help raise funds and awareness for people living with epilepsy.  Contact us to get your fundraising box today.

We have various unique sponsorship opportunities throughout the year including Purple Month, our annual Walk for Epilepsy or other community events and funding our printed materials and online marketing. Epilepsy ACT will ensure your business benefits in many ways, including increased brand awareness, potential business opportunities and acknowledgement / publicising your commitment to our cause.

Many businesses match the money that their staff have raised for Purple Month. For example, if a member of staff raises $500 though a Purple Month event or activity, the company also donates $500.

Making March Purple for Epilepsy and hosting an activity at work is a fun way to promote Workplace Giving.

Workplace Giving is an easy and cost-effective way for your organisation to help support people living with epilepsy. It’s also a great way to build team morale, and to demonstrate to clients and suppliers that you are committed to Epilepsy ACT’s work.

Organisations involved in this type of giving typically make a commitment to promote workplace giving to their staff. Many organisations also choose to match the donations made by their employees. Hosting a Purple Day activity on 26th March is one way to promote this.

Once a staff member has indicated they would like to support Epilepsy ACT through Workplace Giving, regular donations are automatically deducted from their pre-tax salary via your payroll system. Your staff can decide the amount they would like to donate.

Workplace Giving is simple to administer, and gives your employees tax advantages. It can also provide Epilepsy ACT with a stable stream of support, so it’s a great way to help support our work.

If your business were to select  Epilepsy ACT as their charity for the year, we would work closely with you to help create a calendar of events for the year involving your staff, customers or clients. We will publicise your fundraising as widely as we can.

There are a wide variety of activities you can do with your students, from wearing purple to hosting a picnic or BBQ. You can raise money with gold coin donations or raise awareness with activities.

You can also get some great ideas on celebrating purple day from the following resources:

Set up an educational display in your workplace or school to promote education about epilepsy and seizures.

For further information about Making March Purple, promotion materials or how you can get involved please phone 6287 4555 or click here to contact us.

If you are hosting an event, please let us know by registering your information here.

A Message from Cassidy

“Hi, my name is Cassidy Megan. I am 10 years old and I have epilepsy. I started purple day because I wanted to tell everyone about epilepsy, especially that all seizures are not the same and that people with epilepsy are ordinary people just like everyone else. I also wanted kids with epilepsy to know that they are not alone.

Before I started Purple Day, I was afraid to tell people about my epilepsy because I thought they would make fun of me. After the Epilepsy Association of Nova Scotia, Canada did a presentation in my class, I started to talk with other kids about my seizures. That is when I decided to become a spokesperson for kids with epilepsy.

Please join me in wearing purple on March 26th to support epilepsy awareness.” 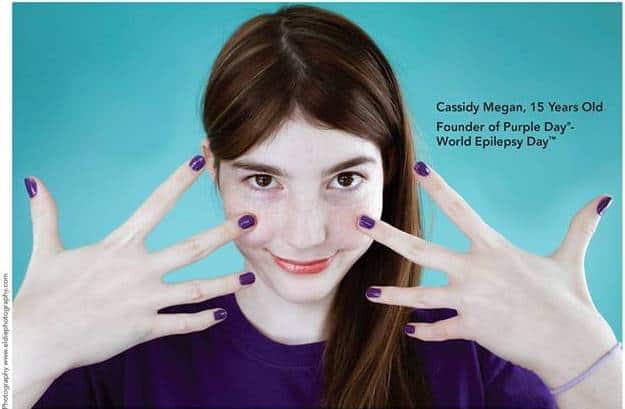